Let?s begin this chapter with a story.

Imagine there is a set of twins, both of whom are traders and who are identical in almost every way. They both have the same trading system, same entries, exits and money management rules. They both commence trading with exactly the same amount of money, using the same broker and receive the same buy signals.

After two months of trading, you would expect each twin to end up with exactly the same amount of money. However, one twin has a 30% increase in her account while the other has a 10% decrease. So, what causes one trader to be a success and another to fail?

The reason for this difference lies in their trading psychology.

However similar they may be, it must be remembered that ultimately they are different people and therefore think differently. One twin may get too greedy or too fearful, cutting her winning trades short and letting her losses run, while the other twin has a firm commitment to stick to her strategy no matter what, and hence reaps more reward.

How an individual thinks plays a huge part in the way she trades. What?s more, every person is different and so the way she approaches trading will also be different.

There are two things to remember when it comes to trading psychology:

I don?t pretend to be the first person to say psychology is an important element in becoming a successful trader.

In his book, Trade Your Way to Financial Freedom,? the renowned American psychologist Dr Van Tharp discusses the role that psychology plays in trading success. He divides trading into three ?ingredients of trading?:? trading system, money management and psychology. 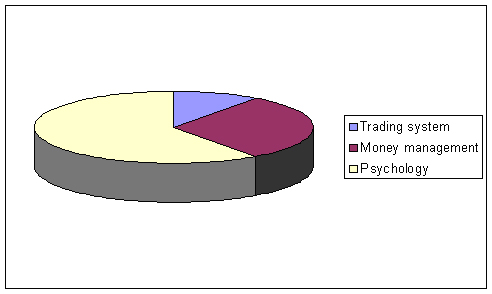 As you can see, the way in which she thinks ? her psychology ? plays more of a part in the make-up of a successful trader than the other components combined.

Your psychology is unquestionably the most important factor you will need to address in your quest to become an awesome trader.

There are many definitions of psychology. The BBC jargon guide defines it as, ?The science that deals with mental processes and behavior?. These mental processes include thoughts, feelings and motives. Emotions such as fear, greed, vanity, pride and hope affect all areas of our life ? especially trading.

Two classic examples where a trader is controlled by her emotions, would be when she closes out a position either too early or too late. Holding on too long demonstrates what is referred to as ?loss aversion? ? the trader?s tendency to strongly prefer avoiding losses than acquiring gains. This is an emotional response hardwired into our genetic makeup. In application this means that when facing a losing position, and the price is going down, a trader will hold on because they don?t like the idea of losing. They?re holding on, hoping the price will turn around. Many times it never does.

On the flip side, you could also say loss aversion causes traders to close out positions too early. When a trader sees a small profit, she is afraid of losing what she already has so she closes out the position too early. These emotional responses are in direct opposition to what a trader should be doing ? cutting her losses short and letting her profits run.

These traders also engage in other forms of irrational behavior, like attributing success to skill and losses to bad luck. Worst of all, this is just the tip of the iceberg when talking about the other devastating effects of trading with your emotions.

The truth of the matter is this: without controlling their emotions, most new traders lose all their money very quickly in the markets. In fact, most are completely wiped out within the first year of trading. Controlling your emotions? and understanding trading psychology really will mean the difference between success and failure.

Can you develop a discipline to follow your trading plan that you might not possess naturally? I think you can. Clearly discipline can be developed, and you only need to look at an army training program for confirmation of this.

However, it is one thing to have a vast and experienced organization bearing down on you, prepared to do whatever it takes to make its point. It is quite another to do it yourself in the comfort of your own home, with all of the distractions of daily life.

So what?s the secret to rock-solid, army-like discipline?

One word: confidence. The discipline to follow your trading plan will come as you build your confidence through studying and applying the steps outlined in this book.

To become a successful trader, you must always be learning and practising your decision-making skills, honing them until they become second nature.Only then can you react faster than a speeding bullet, and with unshakeable confidence.

To figure out what?s going on in your head and to begin understanding your trading psychology, a great place to start is Brian McAboy?s The Subtle Trap of Trading or Trading in the Zone by Mark Douglas. Both of these texts will help you get your head in the game.

& Trading in the Zone

2.?? ?If you think you might need more help getting your head right, check out Anthony Robbins?s material, starting with Unleash the Power Within.